Return to the CERC Studies in Comparative Education. 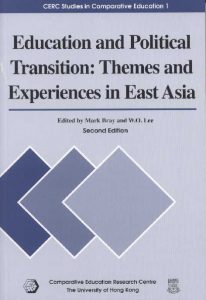 This book is the second edition of a volume published in 1997. Substantially revised and expanded, it throws new light on the links between education and political transition in a dynamic part of the world. Themes addressed by the book include globalisation, internationalisation and localisation; democratisation and nationalisation; colonial and postcolonial transitions; and liberal versus democratic approaches. Individual chapters focus on mainland China, Hong Kong, Korea, Macau, Mongolia, Singapore and Taiwan.

Reviewing the first edition, Philip Altbach commented in the Asia Pacific Journal of Education (Vol.18, No.2) that “these are very worthwhile essays that add significantly to our knowledge of … the region”. Readers will find the second edition an even stronger contribution to the field. 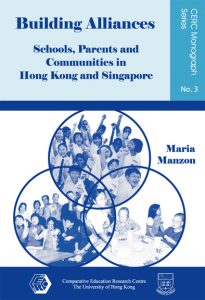 Buy from CERC or online

Governments worldwide are increasingly advocating parental and community partnerships in education. This monograph explores the evolution of parental and community partnerships in Hong Kong and Singapore, and the local and global forces that have shaped those partnerships. It focuses on the work of two government advisory bodies established to spearhead partnership advocacy: the Committee on Home-School Co-operation (CHSC) in Hong Kong, and Community and Parents in Support of Schools (COMPASS) in Singapore. Key policy actors and local academics in the two states were interviewed to gain insiders’ perspectives on the “micro-politics” of educational partnership.Comparative educators, ministries of education, and educational policy makers will gain from this book a penetrating insight into parent-school-community partnership in a pair of Asian contexts, and may find some good practices and lessons.Maria Manzon initially studied in the Philippines and in Italy, and then graduated from the MEd programme in Comparative Education at the University of Hong Kong. She has had almost 10 years of working experience in Hong Kong and Southeast Asia, in the fields of finance and education.

Speaker: Ida Mok
Chair: Lee Moosung< (View the PowerPoint used here)
Students hold different views on what is important and what is indispensable for their individual needs. This seminar will compare perspectives of students in Hong Kong and Singapore. The data set was generated by the Learner’s Perspective Study. Ten consecutive lessons were recorded for each participant teacher, and were followed by two post-lesson student interviews for each lesson. With video-stimulated recall, the students commented on what they considered important in the lessons.

Ida Mok is Associate Professor and Associate Dean in the HKU Faculty of Education. Her research interest includes mathematics teaching and learning, and teacher education. She is the Hong Kong representative of the International Learner’s Perspective Study Project. She is co-editor of Making Connections: Comparing Mathematics Classrooms around the World.