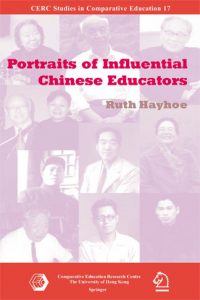 Order from CERC, Springer, or online.

China’s economic rise has surprised the world, and most governments and large corporations feel the need for a China-strategy to shape their relations with this emerging super-power. What do they know, however, about the educational ideas and achievements that have contributed to this economic success? Names of political figures such as Mao Zedong, Deng Xiaoping and Jiang Zemin are household words, yet how many people have heard of Li Bingde, Gu Mingyuan, Lu Jie or Ye Lan?

Substantial research has been done on Chinese educational development by Sinologists and Comparative Educationists, making a wealth of data and analysis available to the specialist reader. Most of these studies have been framed within Western social science parameters, integrating an objectivist assessment of Chinese education into the international research literature.

This book conveys an understanding of China’s educational development from within, through portraits of eleven influential educators whose ideas have shaped the educational reforms initiated by Deng Xiaoping in 1978. They are portrayed in the context of their cultural heritage, families, communities and schools, offering their own deeply reflective interpretations of Chinese education. The book is written for the general reader, to provide glimpses into the educational context of China’s recent move onto the world stage.