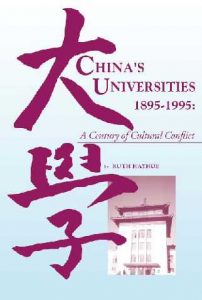 Order from CERC [out of stock] or online

Given the 1996 Choice Outstanding Academic Book of the Year award, this volume has already received critical acclaim. As one reviewer noted:

Ruth Hayhoe is a treasure: everyone interested in modern China, comparative education, or the sociology of knowledge needs to follow her publications [Charles W. Hayford, East/West Education].

This book contains an admirable blend of detail and broad interpretation based on comparative interpretations of many kinds. It is exemplary in its scholarly presentation, and will long stand as a cornerstone work in the field.

Ruth Hayhoe is a noted specialist in comparative education who has long experience of education in China. She is Director of the Hong Kong Institute of Education, and is an Associate Member of the Comparative Education Research Centre of the University of Hong Kong. In 1997 she was elected Vice-President of the Comparative & International Education Society, and became President in 1999.

Foreword by Mark Bray
Introduction: A Story, Not a History