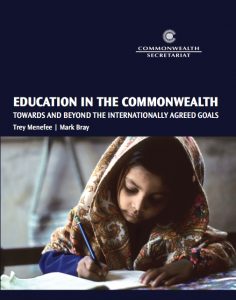 Published by the Commonwealth Secretariat,
Produced by the Comparative Education Research Centre (CERC)

Every three years the Ministers of Education and senior officials of the 54 Commonwealth countries convene to share experiences and advance on common agendas.

The 18th Conference of Commonwealth Education Ministers (CCEM) was held in Mauritius from 28 to 31 August 2012. It focused on progress towards the Millennium Development Goals (MDGs) and the Education for All (EFA) goals.

Mark Bray and Trey Menefee were contracted by the Commonwealth Secretariat to produce the lead statistical document containing country ‘report cards’, which they presented during the opening session of the Ministers’ meeting. In this seminar they will share observations both on their report, on the nature of the Ministers’ meeting, and on the wider agenda concerning new goals beyond 2015.