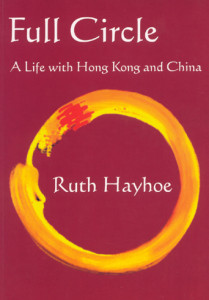 Order from CERC or online

A Chinese edition of the book is available.

Full Circle is the story of a life transformed by long exposure to the peoples and cultures of China and East Asia. The stories of many people in Hong Kong, China and Japan are interwoven into this narrative account, as Ruth Hayhoe shares what it was like to live through a series of major transitions – from the Cultural Revolution in 1967, to Hong Kong’s return to China in 1997.

Ruth Hayhoe left Toronto as a 21 year-old in 1967 and moved to Hong Kong, where she started her career as a teacher in an Anglo-Chinese secondary school for girls. Intending to stay six months, she spent 11 years in Hong Kong, teaching, studying, assisting a number of veteran China missionaries, and falling in love with Chinese people and Chinese culture.

In 1980 she moved to Shanghai and taught the first two cohorts of university students after the end of the Cultural Revolution. She returned to Canada in 1984, having done a PhD in comparative education at the University of London. Five years later, following the Tiananmen tragedy, she was drawn back to China as Cultural Attache in the Canadian Embassy. She continues to visit China where she does research and development work.

In 1997, the year Hong Kong was reunited with China, she became Director of The Hong Kong Institute of Education, a newly established tertiary institution for teachers. Her life came full circle, as she again settled into the city where she had begun her teaching career 30 years earlier.

Ruth Hayhoe is Professor at the Ontario Institute for Students in Education, University of Toronto. She is an award-winning author of several scholarly books about China’s education between China and Western countries. She is a noted specialist in comparative education and a former President of the Comparative and International Education Society. She is also an Associate Member of the Comparative Education Research Centre at the University of Hong Kong.