CERC will host a webinar by Dr. Lili Yang, a postdoctoral researcher in Department of Education, the University of Oxford, and Dr. Thomas Brotherhood, an Assistant Professor at the Rikkyo University College of Business, who will speak on “A Crisis of Opportunity at English Universities: Rethinking Higher Education through the Common Good Idea“. The webinar will take place on November 8, 2021 (19:00-20:15 HKT) and you are welcome to register via the link shorturl.at/buxER.

Below is the abstract and poster for your information.

The ongoing pandemic has affected all aspects of human life globally. Universities have faced significant challenges in continuing their educational and research activities while at the same time becoming more visible due to their work on identifying treatments, developing vaccines, understanding the impact of the pandemic and exploring the ways of recovering from the crisis. English universities have been at the forefront of these global efforts and have had unique opportunities to contribute, and demonstrate their contribution, to the common good. In this seminar, new empirical materials on how English universities have dealt with the pandemic from the perspective of the common good will be reported. 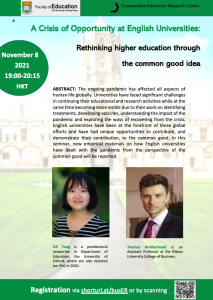 On October 28, 2021, CERC hosted a webinar by Dr. Igor Chirikov, a Senior Researcher and SERU Consortium Director at the Center for Studies in Higher Education, University of California, Berkeley. His presentation addressed the challenges of avoiding the conflict interest in the global university rankings. As Dr. Chirikov argues, “Global university rankings influence students’ choices and higher education policies evaluate universities but also provide them with consulting, analytics, or advertising services, rankers are vulnerable to conflicts of interest that may distort their rankings. The study assesses the impact of contracting with rankers on university ranking outcomes using difference-in-difference research design. It matches data on the positions of 28 Russian universities in QS World University Rankings from 2016 to 2021 with information on contracts these universities had for services from QS. It compares the fluctuations in QS rankings with data obtained from the Times Higher Education (THE) rankings and data recorded by national statistics. Results show that universities with frequent QS-related contracts experienced much greater upward mobility in both overall rankings and in faculty-student ratio scores over five years in the QS World Rankings. These findings suggest that conflicts of interest may produce significant distortions in global university rankings.” 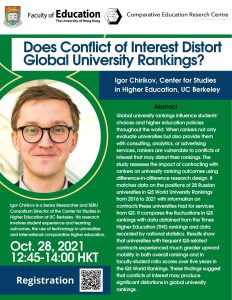 Dr. Riyad A. Shahjahan, an Associate Professor of Higher, Adult, and Lifelong Education (HALE) at Michigan State University, Dr. Ryan M. Allen, an Assistant Professor at Chapman University’s Donna Ford Attallah College of Educational Studies and Coordinator of the joint doctoral program with Shanghai Normal University, and Dr. Adam Grimm, currently a postdoctoral researcher in the College of Education at Michigan State University spoke at the CERC’s webinar on October 14, 2021. According to the presenters, “Despite the ubiquity of global university rankings coverage in media and academia, a concerted attempt to investigate the role of social media in ranking entrepreneurship remains absent. By drawing on an affect lens, we critically examine the social media activities of two commercial rankers: Times Higher Education (THE) and Quacquarelli Symonds Ltd (QS). Based on an analysis of THE’s Twitter feed and QS’s Facebook page between January to June 2020, we illuminate how rankers use social media for affective storytelling to frame and sell their expertise within global HE. First, we demonstrate how THE uses Twitter to engage an audience of institutions, governments, and administrators, reinforcing universities’ increasingly aggressive behavior as market competitors. Next, we show how QS engages a student-oriented audience on Facebook, furthering the role of students as consumers. Before and during the COVID pandemic, we observed that both rankers amplified and mobilized precarity associated with performance and participation, selling hope to targeted audiences to market their expertise as solutions – a strategy that remained amidst the global pandemic. Based on our observation of the front stage of rankers’ social media activities, we argue that rankers’ development of social media as a form of affective infrastructure is conducive to further sustaining, diffusing and normalizing rankings in HE globally.” 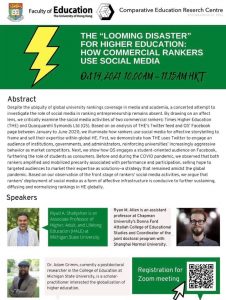 On invitation of the Centre of Higher Education Studies, Institute of Education, University College London (UCL), Dr. Anatoly Oleksiyenko, CERC’s Honorary Director spoke on the topic of ethical dilemmas of the professoriate constructing international partnerships for research and development in the context of competitiveness and performative anxiety. His presentation titled “Academic Mavericks in the Global Marketplace” explored a diversity of tensions across organizational and epistemological domains amid questions on what shapes meaningful collaborations and intellectual leadership in global academia. The webinar took place on October 13, 2021. 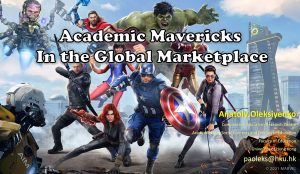