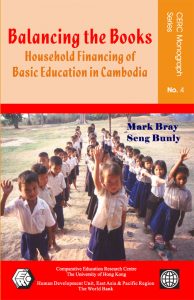 Order this book from CERC or online.

Or download the book for free (see below; World Bank)

Especially in less-developed countries, governments face great difficulties in financing education systems. Households commonly have to make major contributions of resources in order to bridge the gaps.Cambodia is among the countries in which government capacity has been particularly constrained, and in which the household costs of schooling have been especially high. This situation has created a major burden for poor families, and has exacerbated social inequalities. The Cambodian authorities in conjunction with donor agencies have devised policies to address the problem. They have had some significant successes, though many challenges remain.This book presents empirical data on the household costs of primary and lower secondary schooling. It builds on previous research which received considerable attention both nationally and internationally, and shows changes over time. The book has wide conceptual and policy significance, not only within Cambodia but also internationally.Mark Bray is Chair Professor of Comparative Education at the University of Hong Kong. He has written extensively on aspects of methodology in comparative education, and on the administration and financing of education systems. Seng Bunly is the Director of BN Consult in Phnom Penh, Cambodia. He has conducted many consultancies for local and international agencies.