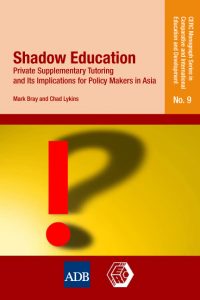 Order from CERC or online
Download for free from ADB.
In all parts of Asia, households devote considerable expenditures to private supplementary tutoring. This tutoring may contribute to students’ achievement, but it also maintains and exacerbates social inequalities, diverts resources from other uses, and can contribute to inefficiencies in education systems.

Such tutoring is widely called shadow education, because it mimics school systems. As the curriculum in the school system changes, so does the shadow.

This study documents the scale and nature of shadow education in different parts of the region. For many decades, shadow education has been a major phenomenon in East Asia. Now it has spread throughout the region, and it has far-reaching economic and social implications.