Dear CERC members,You’re cordially invited to the next CERC seminar co-hosted with the Faculty of Education on coming Thursday, 04 October 2018 at 12:45 – 14:00 in Room 203 of Runme Shaw Building.

by Dr. Keita Takayama, Associate Professor in School of Education, University of New England, Australia
Abstract
This paper assesses the works of Paul Monroe, Isaac L. Kandel and the International Institute at Teachers College, Columbia University in the early 20th century. Drawing on Edward Said’s notion of contrapuntal reading, it foregrounds the colonial and imperial realities of the time as constitutively significant to the early formation of the field. In so doing, the paper unsettles the comforting ways in which the founding histories of the field have been narrated. By illuminating colonial/imperial entanglements during the formative period, this paper reflects upon how the historical and geopolitical context sets limits on what knowledge we produce and how, when the relationship between our scholarship and international development agencies is closer than ever.
About the speaker
Dr. Takayama’s research examines globalization of education both as an empirical and epistemic phenomenon. Recently, he co-edited two special issues in Comparative Education Review and Postcolonial Directions in Education. Currently, he serves the editorial board for Asia Pacific Journal of Education, Comparative Education Review and International Studies in Sociology of Education.
Date: Thursday, 04 October 2018.
Time: 12:45 – 14:00.
Venue: Room 203, Runme Shaw Building.
All are welcome!

A special issue of the Orbis Scholae on Shadow Education 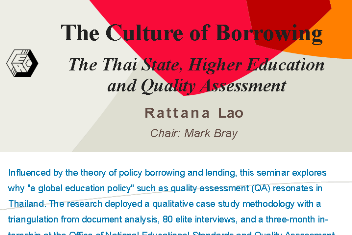 The Culture of Borrowing: The Thai State, Higher Education and Quality Assessment 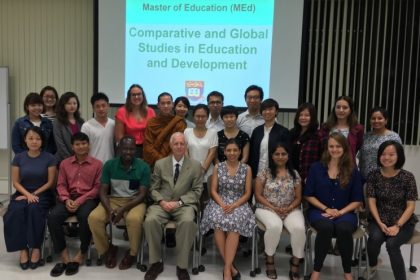