by Dr. Anatoly Oleksiyenko, Associate Professor of higher education, Faculty of Education, University of Hong Kong and Dr. Wenqin Shen, Associate Professor of higher education, Graduate School of Education, Peking University.
Chair: Dr. Liz Jackson.
Abstract
CERC invites you to the book launch at which you will meet the scholars investigating global tensions between the movement to advance progressive university policies and practices and the countervailing forces for restoring old-style hyper-centralization and indoctrination. The cases of higher education systems in China and Russia provide intriguing insights into the anxiety generated by these tensions.
Book Launch special price: HK$200 (HK$250 market price).
About the speakers
Anatoly V. Oleksiyenko’s research focuses on governance transformations in global higher education. Over the last decade, he has conducted studies on international competition and the collaboration strategies of research universities in Cambodia, Canada, China, Hong Kong, Russia, Singapore, Taiwan, Ukraine, and the United States.
Wenqin Shen researches training system and doctoral education in China and around the world, the history of higher education (history of the idea of liberal education and history of the field of higher education research), student mobility, and the internationalization of higher education.
Date: Monday, 15 October 2018.
Time: 12:45 – 14:00.
Venue: Room 203, Runme Shaw Building.
All are welcome! 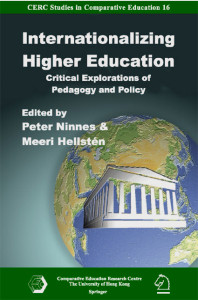 Order from CERC, Springer, or online.

Globalization is a multifaceted phenomenon, and one of its major components is the internationalization of education. The increasing pace and complexity of global knowledge flows, and the accelerating exchange of educational ideas, practices and policies, are important drivers of globalization. Higher education is a key site for these flows and exchanges. This book casts a critical eye on the internationalization of higher education. It peels back taken-for-granted practices and beliefs, explores the gaps and silences in current pedagogy and practices, and addresses the ambiguities, tensions and contradictions in internationalization. In this volume, scholars from a range of disciplines and regions critically examine the commodification of higher education, teaching and support for international students, international partnerships for aid and trade, and the impacts on academics’ work.

Meeri Hellsten is a lecturer in education at Macquarie University, Sydney, Australia. Her research interests are cross-cultural and comparative education, socio-cultural and identity issues in education, e-learning pedagogies, and effective teaching and learning in higher education. She convenes and teaches on a large undergraduate unit in educational psychology. 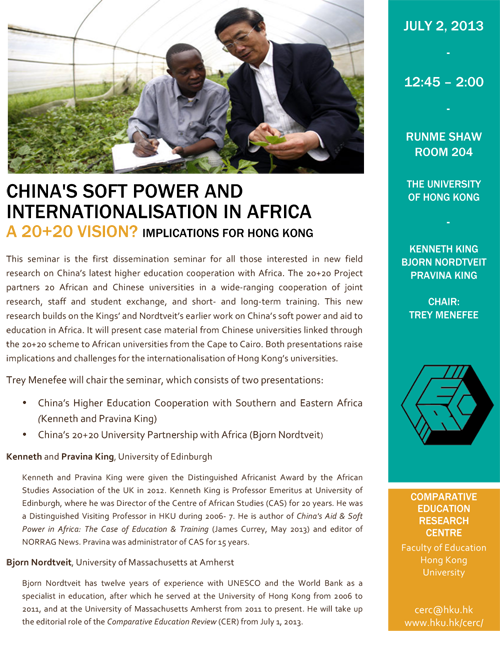 This seminar is the first dissemination seminar for all those interested in new field research on China’s latest higher education cooperation with Africa. The 20+20 Project partners 20 African and Chinese universities in a wide-ranging cooperation of joint research, staff and student exchange, and short- and long-term training. This new research builds on the Kings and Nordtveit’s earlier work on China’s soft power and aid to education in Africa. It will present case material from Chinese universities linked through the 20+20 scheme to African universities from the Cape to Cairo. Both presentations raise implications and challenges for the internationalization of Hong Kong’s universities.

Trey Menefee will chair the seminar, which consists of two presentations:

Kenneth King is Professor Emeritus at University of Edinburgh, where he was Director of the Centre of African Studies (CAS) for 20 years. He was a Distinguished Visiting Professor in HKU during 2006-7. He is author of China’s Aid &Soft Power in Africa: The Case of Education & Training (James Currey, May 2013) and editor of NORRAG News. Pravina was administrator of CAS for 15 years. 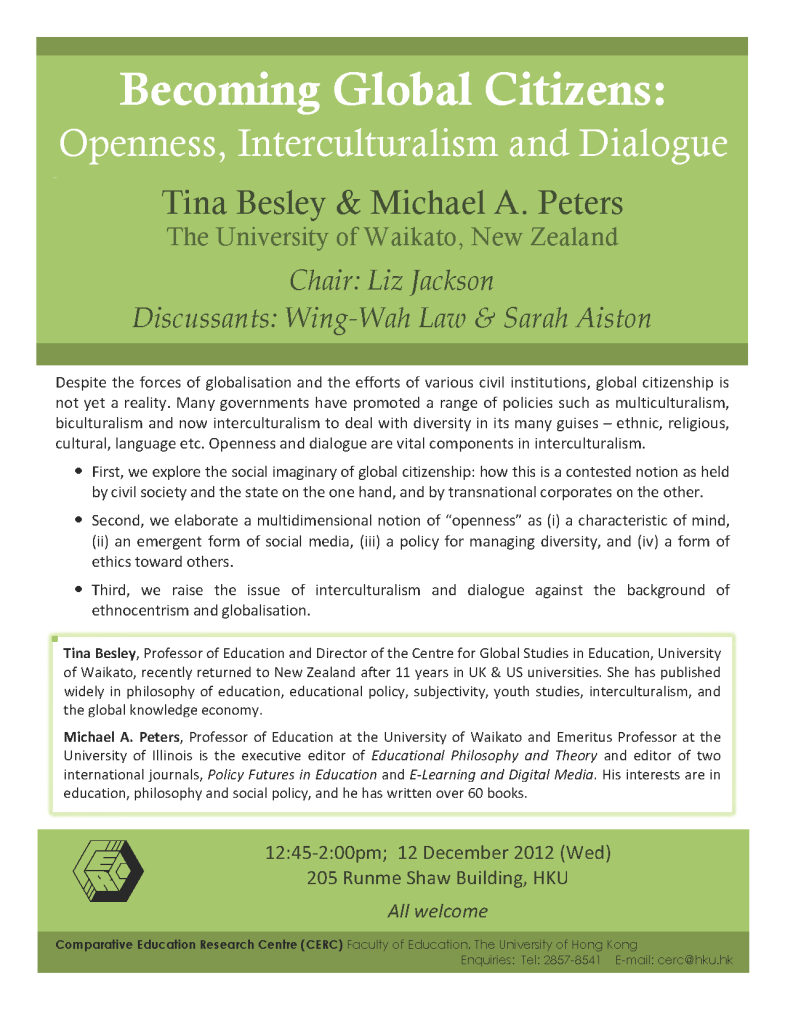 Despite the forces of globalisation and the efforts of various civil institutions, global citizenship is not yet a reality. Many governments have promoted a range of policies such as multiculturalism, biculturalism and now interculturalism to deal with diversity in its many guises – ethnic, religious, cultural, language etc. Openness and dialogue are vital components in interculturalism.

 First, we explore the social imaginary of global citizenship: how this is a contested notion as held

by civil society and the state on the one hand, and by transnational corporates on the other.

 Second, we elaborate a multidimensional notion of “openness” as (i) a characteristic of mind, (ii) an emergent form of social media, (iii) a policy for managing diversity, and (iv) a form of ethics toward others.

Tina Besley, Professor of Education and Director of the Centre for Global Studies in Education, University of Waikato, recently returned to New Zealand after 11 years in UK & US universities. She has published widely in philosophy of education, educational policy, subjectivity, youth studies, interculturalism, and the global knowledge economy.

MichaelA.Peters, Professor of Education at the University of Waikato and Emeritus Professor at the University of Illinois is the executive editor of Educational Philosophy and Theory and editor of two international journals, PolicyFuturesinEducation and E-­‐Learning andDigitalMedia. His interests are in education, philosophy and social policy, and he has written over 60 books.